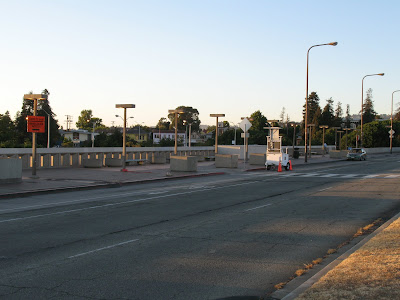 A little over two weeks ago was a meeting regarding improvements to BART's Ashby Station. Prior to the meeting Fight Blight posted a rundown of the existing conditions and some recommended improvements, which I think is a good starting point.
It began with the BART director apologizing for not including the public sooner. The meeting took place the day after the east parking lot was closed to begin construction on the Ed Roberts Campus. One of the first comments was from a young father. He and his brood have used Ashby Station as an underpass for the busy Adeline Street above on the way to and from school, and now with the closing of the east entrance, must cross it directly. He suggested adding flashing lights to the crosswalk, such as at Martin Luther King Jr. Street adjacent. It was a perfectly reasonable suggestion, and one the neighborhood deserves to have implemented to help mitigate the effects of building the Ed Roberts Campus. And it really isn't BART's responsibility, but the problem is that this meeting was taking place the day after the east parking lot closed, rather than 3 to 6 months before as it should have been, and that the City of Berkeley, who would be responsible for adding the suggested crossing lights, was attending the meeting, rather than hosting it along with BART.

This same problem cropped up in several other comments as well, where residents were there to complain or make suggestions concerning the surrounding neighborhood. Now anyone who has been to similar public meetings knows this is the case, it is to be expected, and therefore the relevant stakeholders should have been there to help host the meeting.

The reality is that this is a small project (the BART improvements, at about $3 million) that is taking place (rightly) in conjunction with a much larger project (the Ed Roberts Campus, at about $46.5 million), so you don't want to have numerous meetings on how to allocate the monies, two meetings should do it: one to present preliminary analysis, research and goals of the project and obtain community reaction and feedback, and another to present preliminary designs and obtain more reaction and feedback. And before these meetings even take place, the relevant stakeholders (BART, Ed Roberts, Berkeley, and probably the City of Oakland and AC Transit as well) should have met to coordinate all plans and projects for the area.

The meeting held a few weeks ago was more like what a second meeting should have been, except that the first meeting never took place, nor did the stakeholder coordination. The results were predictably bad. The designs presented were clunky and overwrought (think Oakland's Uptown Transit Center), and worse than that, it is not even clear they were meeting a community need. The problems were numerous, general as well as specific; I will post more detailed thoughts on them over the weekend.
Posted by Raymond Johnson at 7:38 AM