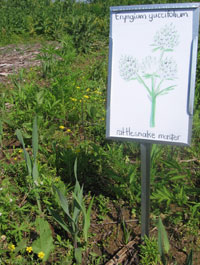 Sharing a page in The Economist with an article on a Prairie in the City of St. Louis is Killing for Respect, concerning crime in Oakland. It is always interesting to see how Oakland is portrayed in the national and international media. And while this article is fairly balanced, also pointing out a "flourishing urbanism", interesting architecture, a beautiful downtown, Lake Merritt and Oakland's amazing diversity, it has me considering canceling my (expensive) subscription, for two main reasons.

The first is the last paragraph, in which the correspondent tries to lay some blame for crime in Oakland at the feet of "liberal politicians" who don't even know how to talk about crime. The example they cite is that Mayor Dellums "had nothing to say at all" at the recent funeral of the four officers killed in the pursuit of Lovelle Mixon. Whatever you think about what happened (me: that Dellums handled it well and the fallen officers and their families demonstrated a lack of respect for the office of the Mayor), that is just not what happened. It may be technically true, but The Economist severely misled its readers in that last paragraph.

The second is that The Economist wrote nearly 2/3 of a page on crime in Oakland without once mentioning the size of the police force. The article simplistically dismisses poverty and racial tensions as factors, while suggesting a theory of a culture of chaos exacerbated by the large numbers of released prisoners, and the inability of our leaders to speak (and thus act) effectively about crime. I happen to think all of these are contributing factors, to a greater or lesser degree. But how can you write a column about crime in Oakland without even mentioning the size of the police force?
Posted by Raymond Johnson at 11:12 PM

Why would you mention the size of the police force? "Oakland has 822 police officers, and their per capita number of officers is about average for large cities in the US." How does that enhance the story at all?

You're right V, a brief mention wouldn't have added much. But to deny that the size of the police force hasn't been a huge point of discussion in the community is incomprehensible to me. Which is exactly what the correspondent did by failing to even acknowledge the topic.