Tomorrow is Park(ing) Day 2011. Oakland Living has a great writeup of the places and activities happening in Oakland. Be sure to check out the video by the Greenbelt Alliance at the end.

I only add that Park(ing) Day was founded in 2005 (image above) by ReBar, "an interdisciplinary studio working at the intersection of art, design and ecology." They have been kind enough to give it to the world.

Unfortunately, I have been on leave from the studio I work with for a number of months now, but it doesn't seem that the Coffee Container, which I hoped would debut tomorrow, has become a reality.
Posted by Raymond Johnson at 1:51 PM No comments:

It is already a quarter over, but this month in San Francisco is the Architecture and the City festival, complete with film series, exhibitions, and lectures. Opening tonight at SwissNex is Switzerland's contribution to the 2010 Venice Bienalle, Teaching Architecture: 3 Positions Made in Switzerland. Next Thursday is a half-day symposium at SPUR on The Bay Area's Modern Landscape Legacy. The following week includes Oakland-based architects envelope A+D in a conversation about Flexible Urbanism, the film Revolutionary Wake: Unfinished Spaces about the creation of Cuba's National Art Schools by three young architects following Castro's takeover in 1961, and a panel on the under construction Transbay Transit Center entitled Grand Central of the West.

Posted by Raymond Johnson at 10:21 AM No comments:

Due to a delay in summer, the Temescal Street Fair has been postponed until July 10th.
Posted by Raymond Johnson at 10:21 AM No comments:

This Friday night the Young Urbanists of the San Francisco Planning + Urban Research Association (SPUR), are coming to Oakland for a night at the Oakland Museum of California (OMCA), which nicely coincides with Art Murmur. If you don't know anything about it, SPUR is a good government organization with a strong emphasis on quality urban design. Although primarily San Francisco focused, it seems to me they have been traveling further afield more of late.

And if you don't know much about the OMCA, it was reopened about a year ago after being renovated by local architects Mark Cavagnero Associates. Originally designed by Kevin Roche John Dinkeloo and Associates, the OMCA was the first commission for the partnership. Kevin Roche won the Pritzker Prize, given yearly to an architect for a significant body of work and one of the profession's highest honors, in 1982. Kevin Roche has gained a renewed interest and following of late for his humanist approach to modernism, as evidenced by the current exhibit Kevin Roche: Architecture as Environment, which was recently reviewed at Design Observer.

Posted by Raymond Johnson at 1:03 PM No comments: 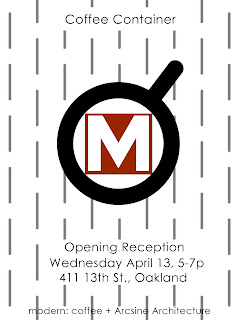 Wednesday night the studio I work for, Arcsine Architecture, has the opening reception for Coffee Container, the design for the transformation of a shipping container into a mobile coffee bar for Modern Coffee. The hope is for the built reality to be completed in time for Parking Day 2011. Modern Coffee is located at 411 13th Street in the Oakland Tribune Tower. The reception is from 5:00 - 7:00 pm, see you there!
Posted by Raymond Johnson at 9:46 PM No comments: 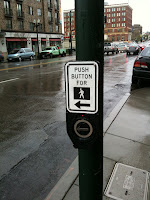 Why is it that in Oakland, that if you want to cross a street and you are driving you just pull up and wait, but if you are walking, you have to push a button?
Posted by Raymond Johnson at 2:24 AM 4 comments:

Tomorrow at the San Francisco Planning and Urban Research Association (SPUR) is a lunchtime forum entitled Going Dutch: Creating a Bicycle-Dependent City. Leah Shahum, the Executive Director of the San Francsico Bicycle Coalition, will share lessons learned from her 8-month sabbatical in Amsterdam. SPUR lunchtime forums begin at 12:30, are free to members or $5 for non-members, and are a great way to learn more about current projects and policy initiatives happening throughout the Bay Area.

Though San Francisco focused, SPUR more recently seems to be taking a greater interest in the larger region. I highly recommend joining for anyone interested in urban planning and municipal good governance issues. There are usually at least one or two lunchtime forums a week, wonderful special events and awards, and they have a great monthly newsletter, Urbanist.

So grab your lunch, get on your bike, and go Dutch!
Posted by Raymond Johnson at 6:51 PM No comments:

Aside from all those things, the new parking kiosks are just plain ugly, with tons of different stickers and signs on them because it wasn't very well thought out in advance. But it doesn't have to be that way. San Francisco does it better, and solar powered too! So does Melbourne for their bike parking (image above). Max is right, Oakland can learn a lot from other cities, maybe even about automobiles and their storage.
Posted by Raymond Johnson at 7:24 AM 10 comments: