Tomorrow at the San Francisco Planning and Urban Research Association (SPUR) is a lunchtime forum entitled Going Dutch: Creating a Bicycle-Dependent City. Leah Shahum, the Executive Director of the San Francsico Bicycle Coalition, will share lessons learned from her 8-month sabbatical in Amsterdam. SPUR lunchtime forums begin at 12:30, are free to members or $5 for non-members, and are a great way to learn more about current projects and policy initiatives happening throughout the Bay Area.

Though San Francisco focused, SPUR more recently seems to be taking a greater interest in the larger region. I highly recommend joining for anyone interested in urban planning and municipal good governance issues. There are usually at least one or two lunchtime forums a week, wonderful special events and awards, and they have a great monthly newsletter, Urbanist.

So grab your lunch, get on your bike, and go Dutch!
Posted by Raymond Johnson at 6:51 PM No comments: 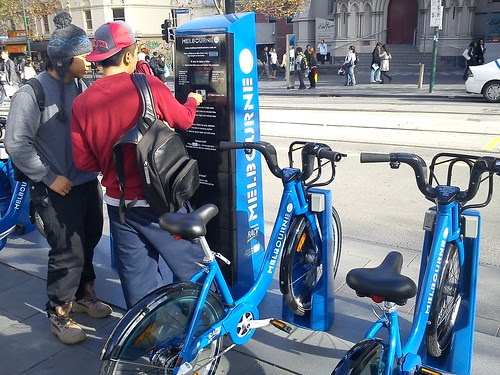 Aside from all those things, the new parking kiosks are just plain ugly, with tons of different stickers and signs on them because it wasn't very well thought out in advance. But it doesn't have to be that way. San Francisco does it better, and solar powered too! So does Melbourne for their bike parking (image above). Max is right, Oakland can learn a lot from other cities, maybe even about automobiles and their storage.
Posted by Raymond Johnson at 7:24 AM 10 comments: