Kicking off just before the Super Bowl is a lecture by Aaron Betsky entitled Blob Utopia: Digital Destiny or Aesthetic Escape?, part of the Art Lecture Series at Mills College. Betsky taught the visiting professor studio at UWM School of Architecture and Urban Planning (SARUP) I took back when he was the Curator of Architecture, Design and Digital Projects at SFMoMA. The studio was a refreshing change from the dominance of New Urbanist thinking prevalent within SARUP at the time. Betsky challenged us to view the suburban landscape of sprawl not as a spatial condition that needed re-form, but as the physical manifestation of modernity and the milieu to which architects must give meaning and coherence.
After SFMoMA, Betsky went on to head the Netherlands Architecture Institute in Rotterdam. A few years ago, he became director of the Cincinnatti Art Museum, likely in large part because of the opportunity to build a new museum. Since then, the museum sponsered an invited competition and hired Neutelings Ridijk Architects (Rotterdam Shipping and Transport College building pictured above) to design what will be their first U.S. building.

Betsky is also the author of numerous architectural monographs and books on design, the best of which is False Flat: Why Dutch Design is so Good. The lecture is at 3:00 pm on Sunday, in the Danforth Lecture Hall of the Art Building at Mills College.
Posted by Raymond Johnson at 10:31 AM No comments:

Every 6-10 months I come across the Bay Model and then forget about it before I have a chance to visit. For those who don't know, the Bay Model is a 1.5 acre working hydrological model of the Bay Area, which according to the website is "much smaller than the actual San Francisco Bay and Delta."
The Bay Model was built in 1957 and used by the Army Corps of Engineers to study the effects of interventions like dredging shipping channels and accidents such as oil spills. Though retired as a research tool in 2000 (presumably the Corps now uses computer models), the model continues to operate as a public education center.

The Bay Model Visitors Center is located in Sausalito at 2100 Bridgeway, and is open Tuesday through Saturday in winter and on Sundays as well in the summer. But this Saturday from 11:00 to noon, there is a special walking tour of the model entitled "Back in Time on the Bay", which explores changes (both natural and unnatural) to the Bay from pre-historic times to the present. If you (like me) can't make it this Saturday, the tour will be offered again on Saturday 21 February.
Posted by Raymond Johnson at 12:25 AM 1 comment: 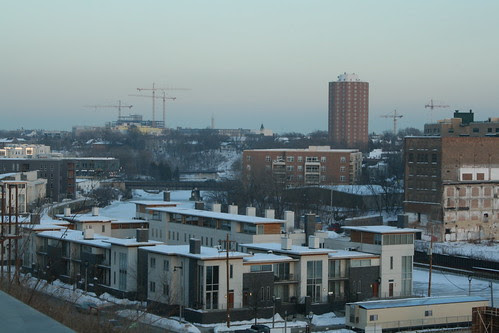 My first urban design studio in architecture school was a beta test of a plan put together for the redevelopment of the Beerline B. This rail line along the Milwaukee River served the Blatz, Pabst, and Schlitz breweries, importing barley and hops and exporting beer to the nation as the industry consolidated heavily at the beginning of the 20th century. By the end of that century though, the line had been abandoned and the land surrounding it gone mostly fallow.

The original plan was put together by San Francisco based architect Dan Solomon, who had an op-ed piece in the San Francisco Chronicle on Friday discussing the possibilities and challenges in reorganizing our built environment for a post-petrol world.
Posted by Raymond Johnson at 10:27 PM 1 comment:

Today at the Temescal Library is an opening reception for the exhibit, Italian-Americans in Temescal: The History of the Columbo Club. I learned about this last month at the Temescal Library Reception from Giovanna Capone, who had put together a preview from the "archives" (a bunch of stuff in boxes in some back room) of the Columbo Club (careful, that link has music).
The event will feature a speech by Temescal historican Ray Rainieri, who also conducts a wonderful walking tour of the neighborhood through the Oakland Heritage Alliance. In addition to her work cataloging the Club's historical documents and photographs, Capone has assembled an oral history video of some of the its senior members.

The Columbo Club is the oldest Italian social club in Oakland, and one of the largest still in existence in the U.S. Founded in 1920 by 34 Piedmontese immigrants, it currently has a waiting list of several hundred. On Sunday mornings, the Club is open to allow patrons of the Temescal Farmers' Market to use its restrooms, which is something I highly recommend. The photos and memorabilia on the walls, as well as the general decor, is like stepping back decades.

The event today is from 3:00 to 5:00, and the exhibit will be open at least through the end of January. The Temescal Library is located at the corner of Telegraph Avenue and 52nd Street, where Claremont Avenue meets Telegraph.
Posted by Raymond Johnson at 10:03 AM No comments:

This morning the San Francisco Chronicle reports that funding has been halted for the fourth bore of the Caldecott Tunnel. Though, it is unfortunate California cannot start a massive public infrastructure project at the precise time when it both would get better deals on construction costs and our economy could use a boost, this is a terrible project. Anyone who wants to understand why California has such a huge budget problem, while having relatively high taxes and still continuing to educate its children trailers and postpone the repair of its crumbling infrastructure, need look no further than this project.

Leaving the environmental considerations aside (which we shouldn't), this project is just completely unnecessary. At nearly half a billion dollars, it is expensive in and of itself. But the larger problem is that a fourth bore would exacerbate the region's suburban sprawl, which is in itself a hugely inefficient enterprise, requiring massive expenditures on the duplication of infrastructure. If California ever wants to get its financial house in order, it will have to rethink the amount and focus of the money it spends on transport and infrastructure. Here's hoping that we begin that process during the upcoming economic downturn, and before the fourth bore is ever built.
Posted by Raymond Johnson at 7:32 AM 3 comments:

Over the holidays, a real-life conversation with the folks who write two of my favorite local blogs, Living in the O and City Homestead, as well as recent posts at each site, reminded me of something I've wanted to do here at OSA for a while now - SHPR. Basically, SHPR will feature local businesses that I like, support and frequent, ones I think you should as well. Mostly these will be based in Oakland, but sometimes I'll venture further afield, to Berkeley, Emeryville, or San Francisco, and perhaps even occasionally the surrounding hinterlands.

And for the first SHPR, I've chosen a business that, though based in Oakland, has a much stronger identity in San Francisco, which frankly is a situation I'd like to see changed. Oaklanders in Greater Temescal may know Blue Bottle Coffee from their presence Sunday mornings at the Temescal Farmers Market, where a line often 20 deep waits for an individually-brewed cup of coffee. And apparently you can visit what I assume is their roasting facility in Oakland to pick up beans. But several years ago, they opened "an odd but convivial" kiosk in the Hayes Valley neighborhood of San Francisco. It is located at 315 Linden Street (essentially an alley) in a former garage (image above). And it combines several things I love: crisp, modern design; glutonous coffee; and the reuse of urban space previously dedicated solely to automobiles.

That is still a functional laneway you see above, with access for cars, but because of Blue Bottle, it is now so much more - it is a place. And this kind of place-based thinking is something I would like to see more of in Oakland. Though there are few areas of Oakland where this exact type of thing could occur (we unfortunately don't have many alleyways), there is lots to emulate here without copying directly. One could easily see a similar business on a side street adjacent to a commercial High Street (a British term I love) in Oakland, provided the local zoning would allow it (and if it wouldn't, why not?).

More recently, Blue Bottle opened a cafe at Mint Plaza in San Francisco. I haven't yet been to the cafe, but Mint Plaza on the whole is a weird place. The landscaping is fairly nice, but overall it has a festival marketplace feel similar to Jack London Square, though a touch more sophisticated and far better designed and executed. This weirdness is largely due to the anti-market nature of the surrounding buildings, most of which were redeveloped by a single organization, Martin Building Company. Its an odd choice, Blue Bottle locating at Mint Plaza, because it seems they would do better in a more market-like (what materialist philosopher Manuel De Landa would term a "meshwork") setting, where their competitiveness and creativity would shine. Which is why I'm hoping that, for their next venture, Blue Bottle Coffee will open a kiosk or small coffee house somewhere in Oakland, and why I've made them the first SHPR.

In some ways it would have made more sense to introduce SHPR before the holidays. But I imagine many of the businesses that will end up being featured aren't necessarily places you'd go to get a gift anyways. Many of them will just be little places I frequent, or odd shops I go into. I'm also open to suggestions, so feel free to email me a favorite place of yours. I'd love to check it out and do a write up if it fits the bill.

Originally I thought of this as sort of a weekly shopper but I don't want to commit to that level of frequency, especially since I'd like to better cover general development issues in Oakland while V Smoothe is away (there is a lot of slack to be picked up). But I plan to feature SHPR as often as possible. Unfortunately, there will likely be lots of local businesses closing this year, which makes it all the more important to keep supporting the places that help make Oakland special.
Posted by Raymond Johnson at 9:51 AM 2 comments:

The chilliness of the last few weeks has me thinking of summer. And fortunately for those who love architecture, or those who need to learn about it, the American Institute of Architects San Francisco chapter has been thinking similarly. The current exhibit in their gallery, which closes this Friday, is My Paradise: A Hundred Years of Finnish Architects' Summer Homes. The gallery is located in the historic Hallidie Building just a few blocks from Montgomery Station, at 130 Sutter Street on the 6th floor, and is open from 9:00 am to 5:00 pm, again through Friday.
Posted by Raymond Johnson at 11:54 AM 1 comment: